So since the existing steering stem was a bit shorter than I wanted... 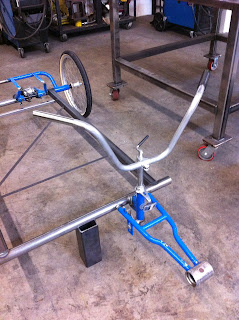 I had to make my own!  That started with cutting a piece of 7/8" tube stock to the length I want and cutting the end at an angle to create a wedge.  I then used a typical wedge piece on the new extended stem (which took some work to get the right angle) - see photos below: 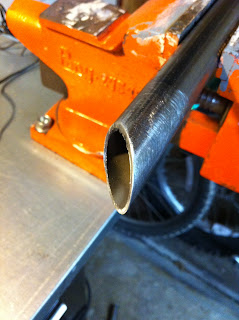 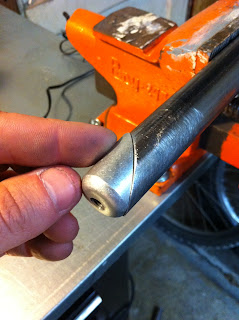 Then I needed to extend the rod bolt that connects to the wedge along with adding a new bar stem and bars (which I obtained from the Bicycle Kitchen - thanks to them for what they do, it's an amazing place).  I did this by welding a piece of rod in the middle of the ends of the original rod bolt.  Eventually I got the wedge to work and the bar stem to clamp on the new tube stock. 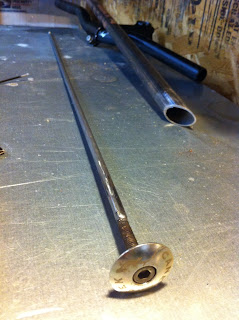 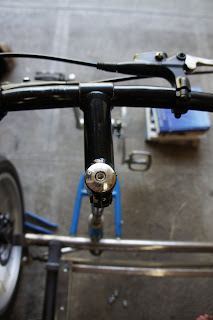 Everything works great! Now I can't wait to put on my fancy grips!  ...waiting till I'm done so I don't get them dirty.

Subtle changes make all the difference. 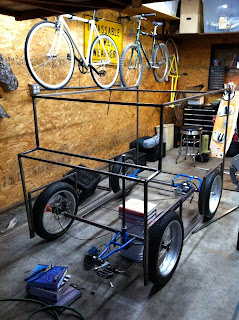 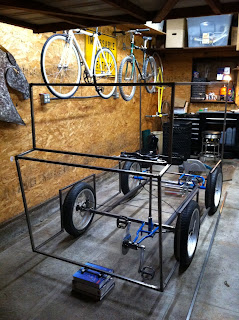 Now you can probably gather that this change has made the pedals stick out past the front of the body and that might look a bit odd...but I think I have a solution.  We'll have to wait and see what it looks like when I start adding the finishing touches to the body.
Posted by JR at 10:58 AM No comments:

The body has been built to match the proportions I originally intended from my scale model and now that it is done, I've come to one big conclusion about it...it's all WRONG!  Seeing it in person, it's just too damn big.  My drawing showed a 4' wide, 7' long, 5' tall body and it looked good on paper, but there were a few determining factors that affected the actual positioning of the body on the frame: the pedals and the distance from the driver's head to the front "windshield".  To avoid the cliche, "homeboy driving on the freeway" look, the driver needed to be in an upright riding position and the pedals as close to the driver as possible.  Despite thinking I had the seating and pedal positions all figured out, once the body was made and mocked up on the frame, it just didn't look right.  The front portion of the truck overhung the front wheels substantially more than I anticipated, which in turn pushed the windshield farther further than I wanted.  If I were to push the windshield back in the position I wanted, I would have ended up with a really long front end; which, if you look at the typical "roach coach", doesn't exist.  The front end needs to be smushed up close to the windshield like a pug stuck in a cubby.  Therefore, drastic measures were taken!  The top is being chopped 6" and the front end is being brought back 10"!  The driver's seating position is going to lowered, as well as the handlebars, but the pedals are being left in place.  Now, I'll leave you to your own imagination as to how it will look once the body is all modified and what interesting features may now exist, but all I'm gonna say is that it's going to look a LOT better! 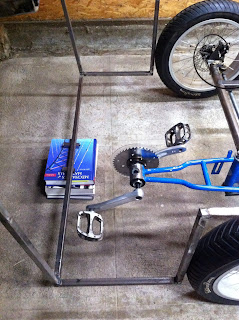 Here you can see the distance from the front wheels to the front end to cover the pedals. 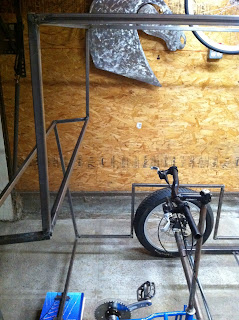 And the distance from the windshield to the handlebars.  =\
Posted by JR at 12:54 PM No comments:

Being a Mechanical Engineer, I've always been intimidated by electrical design work, but I've finally worked up the courage to take on the flowing charges and do some calculations!

As it turns out, determining our battery size is fairly simple. When we’re looking at batteries online, there is a lot of superfluous information that we don’t need to concern ourselves with. The 2 things we DO need to know about are the Voltage and the storage capacity (in Amp/hour or Ah).

Now, let’s assume our vehicle uses 22.35 Wh of electricity when driving at 15 mph. We’re using this as an estimated value only for our baseline calculation (data extrapolated from cyclone-usa.com test results for the same 500W motor).

As a base point, let's assume we want to travel 30 miles at 15 mph; therefore, we are going to consume 670.50 Wh of electricity during that trip.

Looking at these figures, it appears that we can get away with using just (2) 12V batteries and we will exceed our range/speed requirements; however, because we’re using sealed lead-acid batteries, we need to take into consideration that you can’t take lead-acid batteries below 50% capacity without damaging/degrading them and lowering the battery life substantially. Therefore, in order to meet the criteria set (minimum 1340 Wh total), we need (4) 12V batteries. At $158 a pop, that’s $632...

Now, I think 30 miles is probably a little excessive and since I'm planning on riding this bad boy at low speeds and on flat ground, I can probably get away with (2) 12V batteries; which if I back calculate, I'll probably get a little more than half the distance (15miles) or half the speed (7.5mph)...I think I'll be okay with that. Whew, that's enough electrical for me for one week. =P
Posted by JR at 1:48 PM 1 comment:

FINALLY!  Except for a little bit of truing, the wheels are done!  This has been the most time consuming part so far and I can't possibly see anything else taking sooo long.  The concept from these wheels came from the Team Save Ferris Red Bull Soapbox car.  They had a similar style car (thru axles) and I really liked the way theirs turned out.
I started with the hubs: the 2 existing hubs from the original tricycle and the 2 new 20mm Bitex thru-axle hubs.  Then came the rims: 20"dia by 4" wide rims meant for those OCC Stingray chopper bikes.  Associated tubes and tires included.
Finally was the spokes:  I used a combination of 186mm and 176mm spokes to get the pattern I liked.  I used a cross hub pattern with supports on the outside.
Here's a good before and after: 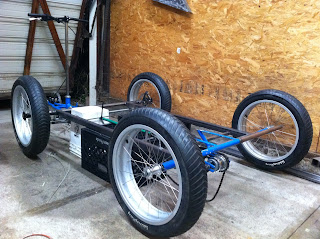 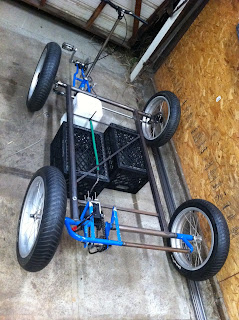 Looks like I might be riding this thing around at CicLAvia this weekend...keep an eye out for me.
Posted by JR at 10:54 AM No comments:

Since the weight of this puppy is probably gonna be pushing 200+ lbs I figured an electric motor would be quite handy when trying to ascend ANY sort of incline.  To keep things simple, I opted for an electric motor kit meant for a bicycle and adapted it for my rig.  I went with a kit from cyclone-usa.com which included a 500W motor w with controller, gearbox and 14T Freewheel Sprocket; mounting brackets and bolts; a 44 tooth freewheeling chainwheel and crank arms (see previous post for installation); brakes with motor cutoffs; and a battery connection harness. 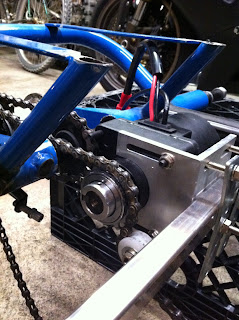 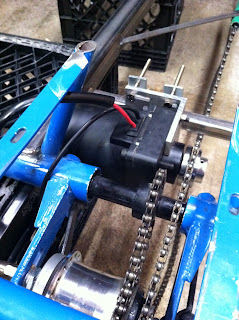 I mounted the motor as close to the rear drive as possible to minimize the slack between the two.  With the makeshift brackets, we'll see how well she holds up.
Posted by JR at 11:15 AM No comments: